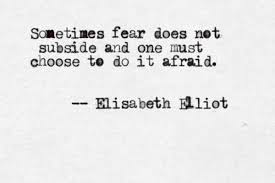 This past week I have read the book of Esther, and parts of Ezra and Nehemiah as I have journeyed through my Chronological Bible reading plan.

And one thing has struck me, each of these have had to be obedient to what God called them to do even though they were afaid.

Sometimes what God ask of us means we have to do it in the midst of our fear.

Someone one said, “courage is not the absence of fear, but acting in spite of the fear.”

This is the type of situation seen again and again in the Scriptures.

Many times we put the saints of old on a pedestal, thinking we could never do what they have done. Believing that they somehow had more faith, and that they were not afraid. Yet, this is not true.

Esther was fearful about approaching the King. So fearful that she called upon the Jews to fast and pray for her for 3 days before going before the king. And her final words to Mordecai was, “and if I perish, I perish.” I am convinced she did it afraid.

Ezra had told the king that the gracious hand of the Lord was upon them, so he did not ask the king for soldiers or horsemen to protect them on their journey. Rather, he called on the people to fast and pray for a safe journey, and then they set out. They did it afraid.

These people were real people with real fears. They were not super saints who did not fear anything. Yet, despite their fears, they did what God asked.

In the New Testament we see this same truth applied in the life of Paul, who pressed on, even though he knew the hardships that awaited him.

Far too often we let fear keep us from being obedient to what God ask. When in fact, fear is no excuse for disobedience.

Yes, in the midst of fear, we like the above mentioned should fast and pray. We should call upon the Lord and His grace, His strength, and His help. Yet, when all is said and done, even when the fear is still there, we are to be obedient.

I can remember the fear I felt boarding the plane that would carry me, myself, and I to spend Christmas in China teaching English. It was horrific, but I went and am thankful.

That same fear rared its ugly head as we took our young kids to Korea and then to Nepal, but how grateful I am that we did these things.

More often than not, what God ask of us, doesn’t really make sense. Especially in the eyes of the world, and the naysayers. Yet, that is when the Lord shines the most, displaying His glory for all who are watching to see us fail.

Fear in the midst of God’s instruction should not paralyze us, it should propel us.

So, whatever God is asking of you, don’t let fear lead you to disobedience.

Do it regardless, even if it means doing it afraid.