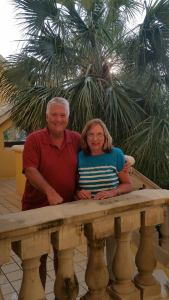 Yesterday Dr. Steve Wilkes went home to be with the Lord. And I know he heard the words, “Well done my good and faithful servant,” as he entered into the presence of Jesus. He wasn’t perfect, no one is… and he probably had regrets as well.

Yet, this was a man who unashamed loved Jesus and who was just real. You didn’t have to pretend with him and he surely never pretended with you. He had a passion for winning souls to Christ, and a huge sense of humor. When I first began seminary, and met him. He broke into Barry Manilow’s song, “Mandy.” (which I had never heard 🙂 )

My first ever mission trip out of the USA was with Dr. Wilkes, as we traveled to French Guiana. Every morning he would break out his guitar as we sang praises to the Lord. As I have read note after note on his Facebook page from students, I have stood amazed at the countless lives he has touched and impacted for the Lord. So many students took their first mission trip with Dr. Wilkes, so many were inspired by his passion for the lost world.

Just a few weeks past, Dr. Wilkes sent an email to my husband and I, telling us how proud of us he was, that we were doing what Jesus said, going into all the world. He encouraged us to start as many churches as possible through our students, telling us that the world would only be saved, as the Gospel is shared and churches are started.

On Friday I read that a church in India, had an all night prayer vigil for Dr. Wilkes and his family. I’m telling you the Lord used him to impact the nations! And as he has now gone on to be with Jesus. His life has inspired me as well as convicted me.

Dr. Wilkes may never know the impact He had here on this earth (though I’m pretty sure he does). Yet, his impact upon student after student, church after church, nation after nation will live on.

I don’t know about you… but it is my prayer that God will use my life to make a difference in the lives of others for the glory of God, just as God used Dr. Wilkes.

As I look back, regrets are there… but praise God, tomorrow is another day, and great is His faithfulness!!!

As Dr. Wilkes would often say, “Let’s win the world to Jesus!”

When we first got to Nepal, I complained a lot about the lack of electricity, water, etc. Thinking that we were somehow suffering greatly because of these things.

But, the Lord is teaching me that this is not suffering, these are merely inconveniences.

Yesterday my husband and I met a refugee from Pakistan. This man told us of true suffering which takes place daily in his home country. He shared with us how the Muslims extremist had killed his mother in law, tried to kill his wife, and eventually forced them to flee from their home and country. All because of his faith in Christ.

He shared with us about how Christians are doused with kerosene or petrol and caught on fire. How homes are burned with the people inside.

Yet, the amazing thing is how Christianity is flourishing in this country. This man had been the pastor of almost 1000 people. At a recent vacation Bible school, there had been close to 800 kids.

If this man and his family were to return to their country, they would most likely be killed upon arrival, because their names are listed among the wanted Christian leaders.

And despite the persecution, despite the consequences, these Muslims are accepting Christ, because they realize Jesus is the One true God, and that salvation is found in no one else.

We complain over the smallest things, things which are no more than inconveniences. Yet, around the world, even in the neighboring countries, believers are truly suffering for their faith in Christ.

I have heard some who believe that if your suffering then there is sin in your life. Yet, Jesus tells us that we will be persecuted. We will suffer. These brothers and sisters in Christ suffer to make Christ known.

Even as I sit here, (though our family is living in Nepal), I sit in my nice home in a gated compound. Even though there are daily inconveniences, we are more than blessed.

Yet, this man and his family have been forced to flee their home, their homeland. They have declared themselves refugees, and are dependent upon the Lord to take care of them, to meet their needs. This man who has three earned Masters degrees, a DMin. and is currently pursuing his Ph.D. has had to leave it all because of his faith and his proclamation of Christ.

And I am humbled.

Humbled that I complain over my little inconveniences, when there are others who greatly rejoice in their privilege to suffer for Christ.

And I wonder, am I this willing to suffer for Christ? Do I fear man more than the Lord? Jesus said, do not fear man who can kill the body, but fear God. (Mathew 10:28)

If placed in a similar position, would I rejoice in this suffering, would you?

The grace of God that allowed us to believe upon Christ, while others have yet to hear of Jesus and yet believe.

We are blessed people. For Jesus also said, Blessed are those whose eyes see and whose ears understand.(Mathew 13:16)

And let us remember we have heard, we have understood, our eyes have been opened not so we can keep this treasure hidden, but so that we can declare this to a lost and dying world. Making disciples, preparing ourselves daily for the Lord’s coming.

He is coming again, may we never lose sight of this!

This past week my oldest son went with his class on a school trip to Lumbini, Nepal. What was supposed to take 4 1/2 hours took 7 for them to arrive,but what was worse was the 11 hours it took them to get home.

For my son the trip was amazing. He got to see all kinds of “cool” things, as well as fish with his hands. But for this mom back in Kathmandu, this trip put me out of my comfort zone.Because I had to trust God with one of my most valuable possessions (and can I say that is just sometimes harder than you realize).

But the worst was last night… well it started yesterday afternoon when I got a phone call from my son. He was calling to let me know that their arrival time was going to be later than the anticipated 6 pm. Because they were stuck in traffic, sitting still. Apparently there had been a landslide and the road was blocked with debris.

Well as you can imagine, the thought of a landslide happening on the very road my son’s bus was on was a hard pill to swallow. Sending me to my knees in prayer. All evening I read the Psalms and prayed for the safe arrival of the group. I prayed that God would surround that bus with His protection and get them safely home.

As the hours ticked by, I prayed. But something happened as I prayed, the peace of God overwhelmed my heart. As I confessed my fear,my lack of trust, my worry.. God filled those places with His peace.

He became my refuge, my strong tower, my rock that safe place I could run to, cling to and hold fast to as I waited out the storm.

Finally around 10:30 he called to say they were almost to the school and asked his dad to come get him. (Happy dance!!!)

When he walked in the door, the first words out of his mouth were, “God really protected us today.” Then he proceeded to let me know that not only had there been one landslide,there had been two, one in front of them, and one behind them. But God had kept them safe. Worse still was the story he told us about a bus going up the hill, who’s breaks went out. He told us the bus came flying backwards down the hill, missing them only by a little bit.

These were things I was glad I didn’t know earlier, but proved to my anxious heart once again… that God had not only heard my prayers, He had answered them. He had surrounded that bus with His angels and brought them safely home.

Living in a foreign country is hard, allowing your teenage son, to go on school trips to places you have never been is harder still.

Whatever you may be experiencing today, run to Him. When others fail, He never does. When others don’t understand, He’s there. When you can do nothing in your own power, He is all-powerful.

It is easy to tell others to just trust God when they are in the storms. Harder though is to follow that “good” advice when you find yourself in such place.

Yet, each time, God shows up and shows out, when I let go and trust Him to do what only He can do.